The doorbell rings, the dog is barking, and the UPS driver is making his escape back up the driveway toward his next delivery.  At your door step...two boxes.  The return address tells you it is from the National Archives.  You've been waiting for this day.  You calm the dog, and proceed to opening the first box, then the second.  Inside...437 pages of a man's life.  This is a Consolidated Military file from Record Group 94.  You carefully thumb through the stacks...everything looks like new and interesting information.  Even documents in the handwriting of the ancestor you've come to know so well.  What do you do next?

Document management is a big deal.  Putting in the time, and following certain logical steps up front will save you time, save you money, and save you headaches later down the road.  I'm drawing from my years of experience as a financial crimes investigator.  We had paper, boxes and boxes of it.  Truckloads even in one case that comes to mind.  Document management is huge. The good news is, it can be easy...just slow down and follow some basic best practices.

Okay, so you have this big stack of documents.  It doesn't matter where the paper came from, or what order (or disorder) it is in.  Relax.  As a family researcher you just want to jump into this stack and going trough it.  Or, you might be on the other side thinking to yourself "What should I do?"  Again, just Relax.  Follow these steps:

Step 1.   Preserve Original Order.  Before doing anything else, consider the state you found or received these documents.  There is an order to them, even if they are just thrown into a box.  One document is on top, others below it, and one is last.  Step back and look.  Think of this like a 'crime scene' or sorts.  You don't know what happened, you just know what you see.  In most cases the documents will have some order, and we want to preserve that order.  It could be important later.  Do not place the documents in any order before going to the next step.  Whatever you do, you need to able to put these documents back into the original order; recreate the 'crime scene.'  We do this by using a numbering system.

Step 2.  Numbering.  Starting with the first or top document, we need to assign a number to each page.  Even blank documents and documents that don't look important.  A simple 1, 2, 3 etc., is okay, but not great.  Just a number on the corner of a document doesn't tell me much.  1 of 437, 2 of 437, 3 of 437 tells me more.  I now know this page 67, came from the stack of documents that numbered 437 in total.  But, we can do better than that.  We want to be able to say this was the 67th document from the Consolidated Military File.  You may have also acquired a Pension File, the Civil War File, or the box of genealogical materials from your late Aunt Mary.  A better way to number a document is with an identifier that names the stack documents.  For the Consolidated Military File, I used "CF".  CF001, CF002, CF003 etc.  The Pension File's documents are numbered using "PF".  PF001, PF002, PF003 etc.  Civil War..."CW".    So now, we can tell the difference between the 67th page of the Consolidated Military File and the 67th page of the Civil War file.  Believe me, they will look a lot alike!  No guessing about this matter.  We know what we have because we took the time to Number the Original Order(s).  Now, put those numbers on the face of the document.  I know you might not like this idea, but it ties into the following steps.  I've have used little pre-printed stickers and just wrote the numbers by hand.  Both are fine.

Step 3.  Scanning.  Yes, scanning.  Paper is good, but you only have one of each.  Things happen, papers get lost.  By scanning the documents you add the flexibility to sort and share them in various files.  And there is a back-up.  Frankly, I don't much care what happens to the original documents after I have them scanned.  Oh, I keep them...in a big file box with all the other stacks of paper I've scanned.  So now there is a fork in the road on how best to approach scanning these documents.  You could pick out only certain of the documents and scan those, or scan the whole darn stack.  If you pick and choose, you run the risk of not making a copy (scan) of something found to be important later.  It can also mess with the computer generated numbering we will discuss below.  If you scan everything, in the order you numbered them, magic starts to happen.  I promise!  Scanning 437 pages wasn't fun.  I did it over several sittings.  Oh, did I add that each page needs to be individually scanned?  Yes, one by one.  You'll see why later.  Scan each document, in the correct ordination, with the number you applied visible in the scan.  Scan them in order...this is very important.  Lastly, file them in a folder containing just the documents from that stack.  Pension File in one folder, Civil War File in another.

Step 4.  Naming Scanned Documents.  Okay, you numbered everything, scanned the individual pages of paper in order, and they are all in the same folder with only documents from that stack.  Now the fun begins, and your hard-work pays off.  I want you to select all files in that folder (Ctrl A) and right click, Rename.  Click on the First document in the list, the first one you scanned for the Rename.

So if this is done correctly, meaning you scanned the documents in order, and you renamed all the documents at the same time, from the top...magic.  CW (1) is the same as scan CW001.  Got it?

Step 5.  Sorting.  "Okay Mr. Cat Box Genealogist wise guy, my documents are still in the same order (or no order) they were when I started this!"  I got ya.  But they ARE numbered correctly.  Typically, any stack of paper you get will have some order.  The documents copied by NARA are copied from the first of their stack to the bottom of the stack.  And, how or why were they in that order at NARA?  Hard to say.  But, this is a Consolidated File.  As documents came in, they were but into the file.  Ole Aunt Mary may have put those documents in that box as she received them.  Date order is not important at this point.  Being able to reconstruct the 'crime scene' is.

So now we get to sort these documents.  And you can sort them in any order you want.  Maybe you just want a folder with your ancestor's original signature.  Or you want only the interesting documents in the final work.  But, if you're like me...they need to be in date order.  Chronologically!  The Consolidated Military File I received from NARA was no where near in chronological order.  I might have put them in order at the paper stack stage, but then I would have lost the Original Order.  So, lets put these files in order my date.

Start anywhere you want, open one of the documents and look for it's logical date.  Once you have the date, close the document.  Now we are going to rename just that one document.  But, it needs to be named in a certain fashion.  Here's how. 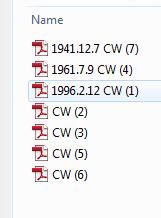 I know I'm using silly dates for the Civil War, but this is just an example.  Look what happened.  Even though CW (7) was below CW (1) and CW (4) in the stack of original documents, by renaming the files with dates in this fashion, all the files magically sort themselves out into date order.  (Be careful not to over write the Letter Code when remaining with dates.) This process of adding dates to documents is very powerful, as we will see below.

What next?  You could stop here.  After all the documents are sorting into chronological order, reading them reads like a story.  It all makes sense.  But you can do more.

Step 6.  Better names.  Here is an example from a project I'm working on.  Here I've applied a short title, between the date and the letter coding, to identify the document.

Notice I'm retaining the Letter Coding and Original Document Order.  This helps me to see what these documents are about without opening them one by one.

Step 7.  Timeline Power!  So I have all these individual folders with different types of documents in each folder...CF, PF, CW.  They are all in date order, but still in their original folders.  What if I could see them all together.  What a story they would tell! Lets do that. So the process is this.  Create a new folder.  Copy and Paste the contents of CF, PF, and CW all into the new folder.  Retain all documents in their original folders!  This is a Copy, not a Move.  What would that look like? 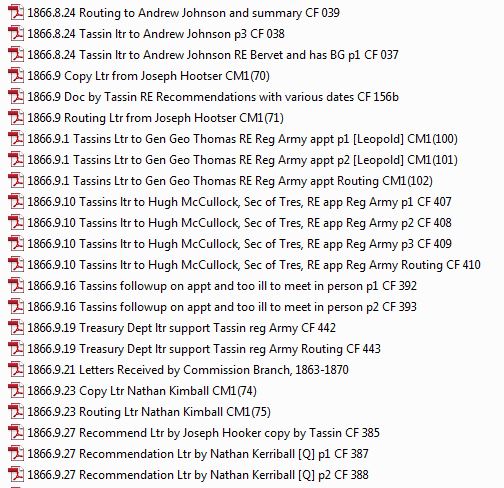 So, for the project I'm working on, I have been collecting, scanning as necessary, renaming by date order, and dropping copies into one BIG Master Folder.  This is the story of his life!

Here we can see different types of documents collected from various sources.  Each in chronological order.  I really like seeing Press Accounts mixed in the with NARA documents, and those lined up with the normal vital records, Census documents, etc. 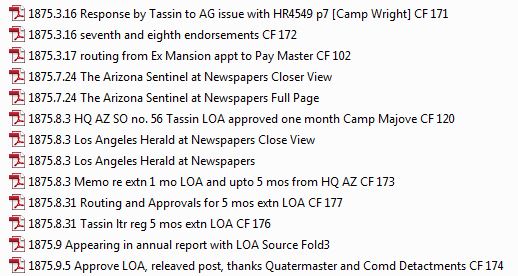 So in closing, just a little bit of extra work done upfront add value to the end result.  Can you see how easy this method of putting things together would make story writing?

Modify this process to your own application.  You might, for instance, prefer to keep separate folders for each of the various original source documents; not mixing one with another.  That's fine, just be able to recall, access, and apply the data.