What is a "Cat Box" genealogist? Or, Just what the World needed...another Genealogy Blog!

Who, or What is a "Cat Box" genealogist????  Well, the term hearkens back to my days in computer forensics when, as a young police detective working in Los Angeles California, myself and others were first puzzled by what to do with this thing called the 'personal computer' owned by the crooks we were investigating.  Back in the day, we'd serve Search Warrants and take evidence in
many...many forms.  For the financial crimes I normally found myself tangled in, this 'evidence' typically took a paper form...boxes and boxes of paper, books, bank records, ledgers, files, 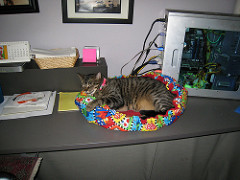 heck...even file cabinets.  But, what to do with the computer the suspect owned??  Unplug it and take it too!  My Evidence Room soon filled up with computers that none of us knew what to do with.  We needed a way to dig 'clues' out of those old clunky PCs in a matter that would hold up in court.  Computer Forensics was born.  And, for the few of us performing this sort of work...it became just about a full-time job.  We had our cases, as well as the cases of our peers.  There we sat...day after day, night after night..seemingly all the time, staring at computer screens.  This was a young discipline and we therefore took advantage of any and all training on the topic we could find.  Once, at such a training venue, a presenter used a term that made me chuckle.  It was something like "Cat Box" computer nerd, or hacker, or something along that vein.  The picture drawn?  I guy who sits at his computer...day and night, never leaving it.  Because he never got up from the computer, there was a Cat Box under his desk.  The Cat Box met the predictable biological necessity of never getting up from the computer...not even to use the bathroom!  I confess to you, the reader of the one bizzionth genealogy blog on the Internet, that I am in truth, and in fact, a "Cat Box" genealogist.
Posted by Aaron Tassin at 12:27 PM